Ambra is a Hero in Battleborn. She is unlocked at Command Rank 14 or by winning 5 matches with a hero from The Jennerit Imperium. 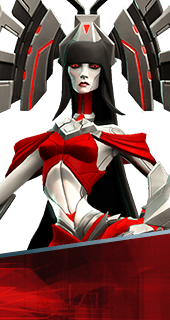 
Ambra long served within the Jennerit Silent Sisters - priestesses who weaved secrets of the stars into prolonged life called "Sustainment". Betrayed by Rendain, Ambra now fights with the Battleborn, healing her allies and devastating foes with localized solar anomalies.

When Ambra's health falls below 20%, she is protected by a Flame Shield for 4 seconds that provides 450 Overshield. 30 second Cooldown.

Ambra's Staff of Radiance drains health from a targeted enemy, returning 30% of the damage dealt to herself.

When Ambra's health falls below 20%, she is protected by a Flame Shield for 4 seconds that provides 450 Overshield. 30 second Cooldown.

Ambra unleashes a series of melee strikes, spending Heat generated by her staff to do up to 38 extra damage per hit.

Summon a Sunspot that does 56 damage a second to nearby enemies at the cost of its own health, exploding if touched. 750 health. Up to 2 active at once.

Channel a fiery wind that damage enemies in front of you. Solar Wind lasts up to 3 seconds, doing 84 damage per second.

Calls down a meteor at a targeted location, dealing 450 damage and leaving a scorching area of effect, dealing 300 damage over 5 seconds.