Benedict is a Hero in Battleborn. He is unlocked at Command Rank 10 or by winning 5 matches as a United Peacekeeping Republics hero. 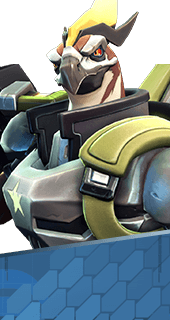 
Brash and arrogant Benedict loves three things: himself, rockets, and himself. Though his left wing was crippled during the evacuation of his homeworld, Benedict is still capable of limited flight, raining down rockets from a high vantage point.

Jump again in the air to double-jump. Hold the jump button to glide for a limited time.

Fires a rocket that deals 187 damage and targets your enemy for 3 seconds. Subsequent rockets home in on targeted enemies.

Launch Benedict skyward for a strategic advantage or a hasty withdrawal from combat.