El Dragon is a Hero in Battleborn. You can unlock this character at Command Rank 20 or by winning 5 matches as hero from The Last Light Consortium. 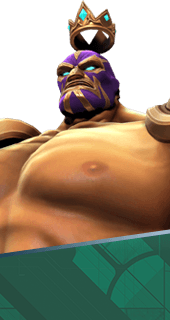 
Francesco Drake ruled the LLC's professional wrestling circuit as El Dragón until his last match, when the renegade magnus ISIC claimed his title... and his arms. Fit with cybernetic replacements, El Dragón now fights for the Battleborn, patiently awaiting a rematch against his greatest foe.

Each enemy killed grants a stack that boosts El Dragón's melee damage. A percentage of stacks are lost on death.

El Dragón's primary melee combo is a flurry of blows, while his secondary is a powerful Clap. Activating his off-hand melee while sprinting executes a Dropkick.

The symbol of El Dragón's faded glory in the ring provided a synergistic effect with the champ's abilities, increasing his effectiveness in battle.

El Dragón leaps into the air and falls back down, dealing damage to nearby enemies. En Fuego: Stuns all enemies damaged.

El Dragón explodes, dealing damage to nearby enemies. For a period of time El Dragon's attacks and skills take on additional properties.