Galilea is a Hero in Battleborn. She is unlocked at Command Rank 12 or by killing 800 minions of any type. 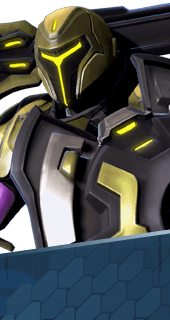 
A sacred order within the Eldrid, the Arbiters of Being were charged with undermining the Jennerit Empire's technology, and Galilea was its most promising warrior. Entrusting her with a long undercover mission, Galilea was embedded within the Jennerit and worked her way through the recruits of the Silent Sisters.

The more that she connects blows and uses skills, Galilea's Corruption grows. Once charged, she begins projecting a passive aura that drains the health of nearby enemies.

She may be a fallen holy warrior of the Eldrid, but Galilea is still incredibly handy and swift in close combat.

When Galilea is ready to wade deep into combat and stare her enemy in the eye, nothing's better than a shield for deflecting blows and defending allies.

That shield Galilea wields can do a lot more than simply absorb damage — give it a toss and share the pain! And, no, she has nothing to do with a certain someone that rhymes with Shnaptain Shamerica.

Always ready for a sword fight, she curses the ground beneath enemies to amplify damage against them.

Take personal time-out with this ability. Galilea's ultimate ability explodes into dark energy allowing her to take a break from the action or run for cover. During that time, she takes reduced damage and regenerates a huge chunk of her health.