Kelvin is a Hero in Battleborn. He is unlocked at Command Rank 18 or by winning 5 matches as a member of The Eldrid. 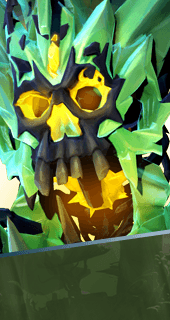 
There are many strange beings in Solus, but the ice golem Kelvin is definitely one of the strangest -- a single consciousness emerging from a colony of extremophilic microorganisms. Rescued by Miko, Kelvin now fights for the Eldrid to preserve what's left of the cosmos.

As Kelvin activates any of his abilities he gains a temporary shield boost.

Kelvin's dense crystalline ice shape is exceptionally durable, allowing him to soak up damage for his team.

After a short delay, Kelvin creates a temporary impassible Ice Wall that will stun nearby enemies on spawn and block movement.