Mellka is a Hero in Battleborn. She is unlocked at Command Rank 34 or by completing the Story Mission The Heliophage. 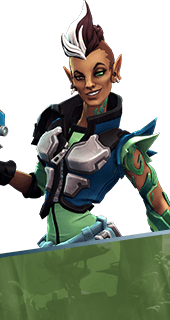 
Born as a refugee, Mellka was raised and trained among an aggressive Eldrid commando group known as the Vigilant. Proficient at several combat styles, but prefers exotic weaponry such as her biologically-active Eldrid gauntlet, now permanently fused with her left hand.

Trained in the elite Eldrid unit known as the Vigilant, Mellka is a versatile and nimble assassin, utilizing her weapons in concert to control the tide of battle.

Lunges forward a short distance for a powerful claw strike dealing 187 damage. Can lock onto nearby targets.

Charges a burst of energy that deals 280 damage to nearby enemies, and launches Mellka into the air.