Nullify is an Ability of Orendi in Battleborn. 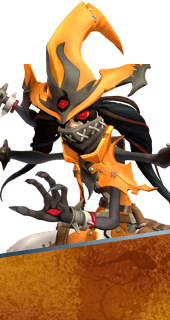 
Fire Walk With Me

Nullify's propulsive burst produces a trail of fire on the ground. +150 Damage over 5 seconds.

Adds a knockback effect to Nullify.

I Hate Your Pretty Eyes

Adds a blind effect to Nullify.

Nullify now moves Orendi in the direction she is moving.


Oh That Reminds Me