Oscar Mike is a Hero in Battleborn. He is available to play at the beginning of the game. 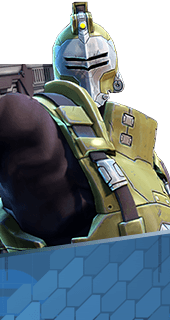 
A discarded clone soldier from a long-forgotten war, Oscar Mike is a capable front-line fighter, engaging enemies at range with his assault rifle, cloaking for quick exits from tight spots, and inspiring allies with his... unconventional personality.

The core of Oscar Mike's combat effectiveness is his Assault Rifle and its many available upgrades.

Activate a cloaking device obscuring Oscar Mike from view and radar detection for 9 seconds. Attacking or using a skill cancels the effect.

Launch a grenade that explodes 3 seconds after launch or 1 second after impact, dealing up to 208-280 Damage to each enemy within its blast radius.

Target an area to strike with 28 laser-guided missiles, each of which explodes dealing 141-282 damage to enemies.