Join VIP to remove all ads and videos

Toby is a Hero in Battleborn. He is unlocked at Command Rank 24 or by winning 5 matches as a hero from The Rogues. 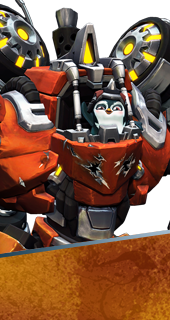 
Despite his talent for engineering, Toby was rejected as a potential Peacekeeper conscript due to his adorable and diminuitive form. Toby then offered his genius to the Rogues, where he can pour his anxious, self-loathing energy into the construction of walking death machines.

Launches an Arc Mine, which arms after a brief delay, dealing 60 area damage per second for 8 seconds. Afterwards, Arc Mine will explode for 90 damage.

Transform your mech to charge up a powerful laser that deals 120 damage a second for 6 seconds.

Double-jumping while holding a direction grants Toby a quick boost in that direction. Boosters hold a total of 3 charges that recharge after 8 seconds.

Me N My Mech

Me N My Mech

Clad in his battle mech "Berg", the adorable-yet-fearsome Toby's considerable engineering talent provides for on-the-fly modification to respond to a variety of battlefield conditions