Ghalt is a Hero in Battleborn. He is unlocked at Command Rank 40 or by earning a Silver rating on all Story Missions on Advanced difficulty. 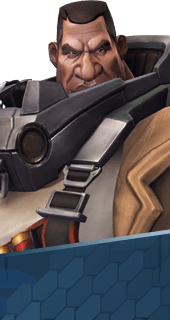 
"Former Peacekeepers officer and capable commander Captain Trevor Ghalt wields his charisma and shotguns with equal effectiveness. As one of the first among the factions to call for unity against the Varelsi, Ghalt is considered the first Battleborn."

Fire out an energy hook that pulls enemies to you.

Deploys a trap to a target location, stunning nearby enemies for 2 seconds and then exploding dealing 133 damage. A maximum of 2 traps can be deployed simultaneously.