Reyna is a Hero in Battleborn. She is unlocked at Command Rank 8 or by achieving 50 assists in competitive matches. 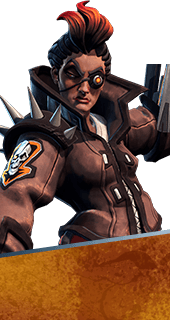 
Known as "the Valkyrie", Reyna Valeria is one of the few Battleborn native to the Solus system, and the ad-hoc leader of the Rogues. Reyna uses her command glove to shield her allies from danger and mark targets for swift retribution.

When Reyna places a Shield Booster overshield on an ally, she receives one as well.

Reyna makes use of her highly adaptable and durable shield system to compensate for relatively low health.

Applies an overshield to target ally that blocks up to 315 damage over the next 8 seconds. During the time, Reyna's Plasma Pulse can charge the target's shield.

Fire a homing blast that deals 81 damage (+50% bonus to shields) and reveals the target's position. The target takes 116% incoming damage for 6 seconds.

Deploy a large energy dome that immediately knocks enemies out of the area, and continues to block enemy fire from entering or exiting for 6 seconds.