Whiskey Foxtrot is a Hero in Battleborn. He is unlocked at Command Rank 16 or by winning 15 matches. 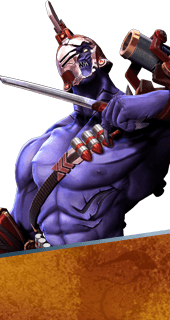 
Unlike his clone contemporary Oscar Mike, Whiskey Foxtrot (unit RDC-WF02-1221) originated from a batch of defective troopers, and is the last surviving member of his line. Rejected by the Peacekeepers, Foxtrot joined up with the Rogues after arriving in Solus.

After killing an enemy, Whiskey gets a boost to his attack damage.

His tactical assault rifle delivers a ton of punch behind three tightly-grouped shots.

Whiskey Foxtrot's battered UPR armor still serves him well in battle – with a few modifications here and there, of course.

Hurls a grenade that sticks to surfaces and enemies. Detonates after several seconds, dealing damage to nearby targets.

Fires a spread of shrapnel from the rifle's underbarrel, dealing damage.

Loads Whiskey Foxtrot's Tactical Rifle with a clip of bullets which can be fired fully automatically.