Deande is a Hero in Battleborn. She is unlocked at Command Rank 38 or by completing The Heliophage Story Mission. 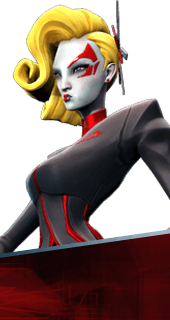 
"Before Deande spearheaded the Jennerit rebellion, she was the Spymaster of the Jennerit Imperium, and one of Rendain's closest advisors. Swift, stealthy, and exceptionally lethal, Deande is one of the deadliest assassins the Imperium has ever produced."

The Element of Surprise

For 3 seconds after uncloaking, all of Deande’s skills and attacks deal 25% additional damage.

Cloaks Deande and deploys a decoy (20% health, 25% damage) to fight in her stead for 8 seconds. Upon death or expiry the decoy explodes for 20% damage.

Upon activation, Deande unleashes a flurry of 10 strikes directly ahead of her, stunning enemies and dealing 50 damage per hit.