ISIC is a Hero in Battleborn. He is unlocked at Command Rank 30 or by completing The Algorithm Story Mission. 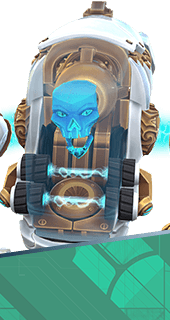 
Once the lead manufacturing Magnus of Minion Robotics, ISIC abandoned his post to crash reality itself through the application of unthinkably complex code. Though debugged by Kleese, this Magnus is still regarded as among the most nihilistic and terrifying of the Battleborn.

ISIC's secondary attack deploys his Energy Aegis to block up to 500 incoming damage.

Raise 5 protective wards that orbit ISIC for 8 seconds, each blocking up to 315 damage from enemy fire. Overcharged: Each ward blocks up to 365 damage.

ISIC charges to a target location while engulfed in plasma, dealing 280 damage to enemies along the way. Overcharged: Deal 325 damage to hit enemies.