Phoebe is a Hero in Battleborn. She is unlocked at Command Rank 22 or by killing 50 enemy players. 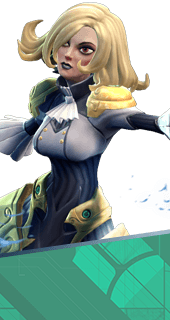 
Counted among the LLC's greatest engineers, Phoebe Elizabeth Audelia Hemsworth IV utilizes powerful technology to move swiftly about the battlefield, and an array of five telekinetically-suspended swords to annihilate her foes.

Phoebe swipes at enemies and activates her high-tech formal wear to propel herself in any direction.

Phoebe's high-tech formal wear and telekinetic sabres can be augmented to substantially increase her survivability and lethality.

After a brief charging period, Phoebe teleports to a target location.

Conjures a storm of falling rapiers dealing 505-730 damage over time to a large area.