Rath is a Hero in Battleborn. He is available to play from the beginning of the game. 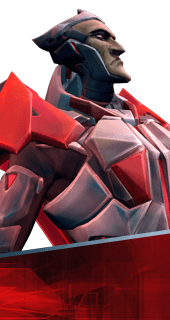 
Verod Rath is not a vampire, though he gets that a lot. Rath is a master bladesmith and swordsman of the Jennerit Empire, once a member of the Keepers of the Blade -- the elite guard of Empress Lenore. Rath is deeply focused on the art of battle, applying his three energy blades with lethal efficiency.

When Rath damages an enemy's health he steals health worth 10% of the damage from melee attacks and 10% of damage from skill attacks.

Rath's ceremonial Jennerit armor is sturdy enough to absorb plenty of damage, but light enough to preserve his speed and mobility.